“Help. There is a mystery smell in our Airbnb and a different mystery smell in another vacation rental. I’m wondering how to get rid of the stinky odor. I clean my space with eco-friendly enzyme cleaner and I’m not talking speed cleaning. I’ve washed and scrubbed everything. There is no mold or mildew just a bacterial mystery smell.”

We Ask a House Cleaner any tips on the lingering smell and cleaning advice to get rid of it.

Angela Brown, The House Cleaning Guru says “cleaner is not always the answer.” And then she gives an “ah ha” explanation.

Listen: How to Get Rid of the Mystery Smell in Airbnb

Watch: How to Get Rid of the Mystery Smell in Airbnb


Hey there, I’m Angela Brown, and this is Ask a House Cleaner. This is a show where you get to ask a house cleaning question, and I get to help you find an answer.

How Do You Get Rid of a Mystery Smell? 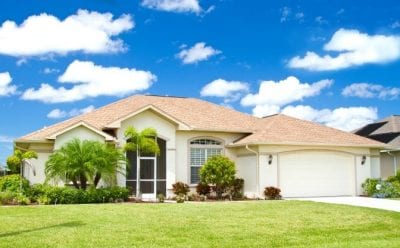 “Hey Angela, I have a question for you. My husband and I have a vacation rental business. And we’ve been property managers for about 15 houses in Florida. And I’ve been running into this recurring problem at some of our homes. There’s this strong bacterial smell, that smells like an old locker room, in one of the bathrooms.

I’ve used several different enzyme cleaners in the entire bathroom. I’ve removed and washed all the fabrics, the towels, and the drapes. But the smell remained until one day before an arrival when we went to ready the home the smell was gone.

After a few turnover guests, the smell returned, and this time it came back in another bathroom.

Then, I have the smell in two of the other houses that we maintain. It lingers for a few weeks, and then it fades, and I have no idea what could be causing this.

I wash my microfiber cloths and my mop heads, but any advice would be greatly appreciated because I’m so confused.”

The Root of the Mystery Smell in the Airbnb 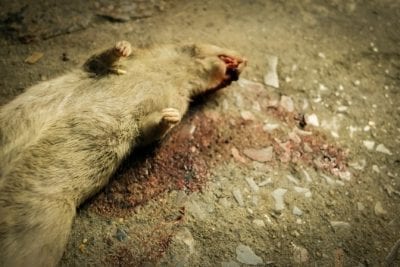 This is a common problem believe it or not. What it is most likely, are dead rodents that are making your house stink. They find their way up the pipes and they die in the drywall trying to get in your home.

Here’s how it works. If there are crawlspaces on the property, and that’s where there’s a little bit of a brick build up. (Now, some Florida houses have this, some do not.)  But if you’ll go around the perimeter of your house with a flashlight, you’ll find holes. What you’re looking for are any holes that are about this big, the size of a nickel or a quarter.

You’re looking for a hole that a mouse could squeeze through. Look for crevices or cracks in the foundation of the home. Voles and Moles can even burrow their way under a paved walkway and into an opening in the house. Then they work their way towards the water pipes. 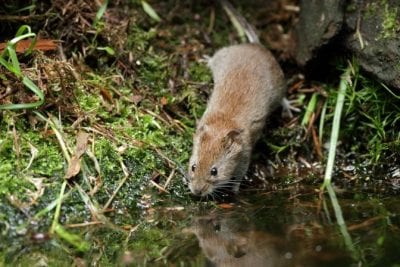 Now, they can hear running water, and mice and little rodents often gravitate to water.  Note: mice don’t need much water to survive and get most of their water from the food they eat. But the water also attracts other things they eat.

Also, the pipes in a home have warm water in winter and cool water in summer. So, water pipes are a great place then for rodents to hang out – not to mention that water pipes enter the home. With any luck, a mouse will find a hole in a pipe leading into a house that isn’t sealed. Which means more food.

As they get underneath the crawlspace of your house, they work their way towards the pipes and they can’t get in.  The pipes are sealed off, but they can hear the running water and they think, “Well if I just work my way up, there’s got to be an opening somewhere.”

Rodents Get Stuck in the Drywall of Your House 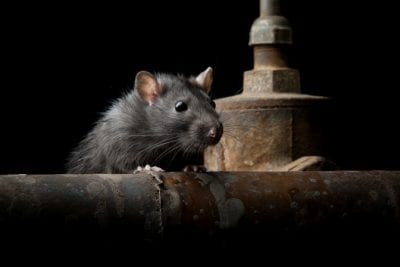 So, if they work their way through the house, through the pipe system, oftentimes they will get caught in the drywall somewhere.

Mice can chew through just about anything including drywall. But if they get tired or confused, or they’ve eaten through layers that haven’t produced any results, they could give up.

Often, it’s near your bathroom, under a cupboard with a sink or behind a shower wall. Behind a fiberglass shower is nothing but drywall and wood studs. If they get trapped they can die, and as their little bodies rot, it produces this musty smell. And then after a couple of weeks of decay, the smell goes away.

You Can Prevent the Mystery Smell 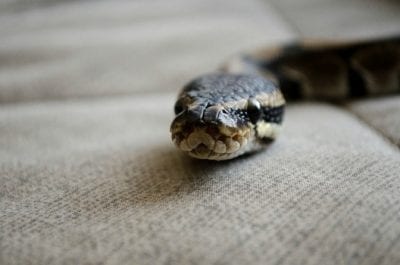 Did you know that you can prevent animals and rodents from climbing underneath your house? Prevention is another way eliminate odor.

We actually had to do this at my house, because a snake got in. (Scared the living daylights out of me, because I don’t do snakes, and I don’t do them inside my living room.)

All right, so what happened is, we went around the perimeter of the property, with a flashlight looking for holes.

And we blocked the holes with hardware cloth or wire mesh.  It’s one fourth in diameter, and it’s a metal sheet, and you can just take a pair of wire cutters and you can cut it, so that it is whatever size you need.

Zip Tie Hardware Cloth to Plug the Holes in Vents 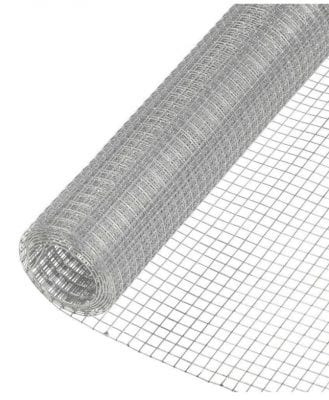 You can fold the wire mesh to plug holes, crevices, and repair vents that rodents have chewed through. At my house, we had several holes in the vents and there were crevices around the dryer vent and crawl space door that rodents could get through.

The snake we found in my house was a rat snake. So, he’s looking for mice, which means the mice also got in there as well. Plugging the holes prevented future mice and snakes.

But you’re looking for small holes.

We used zip ties and hardware cloth to mend vents. We just cut a piece of wire mesh a bit bigger than the hole and like sewing, we weaved a zip tie in and out and locked it in place. 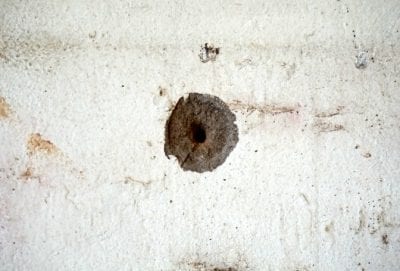 We went around the perimeter of the house and we repaired all the little holes where mice and rodents could get in. Then we took some silicone and filled in all the gaps and cracks. This way the snakes and rodents could not get in.

If you use silicone, make sure you get the waterproof, weatherproof kind. Because you want it to hold with rain, humidity and temperature changes.

So, there are a couple of things that you can do on a do-it-yourself basis. And we actually hired somebody to come out and do it, and that was like $400, it was expensive.

I realized later we could have done that ourselves, with a thing of silicone, which is like five bucks. and some mesh hardware cloth, which is thirteen bucks. Anyway, I went around the perimeter with him, so that I could see what it was that he was doing. (And so that I could watch and learn.) 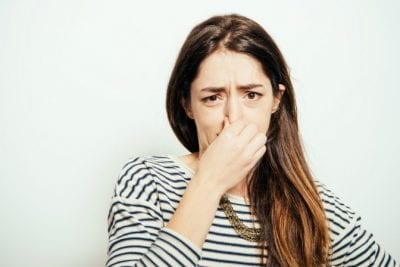 Rodents can enter your house at any time, but it’s usually early spring and late fall. When the weather heats up, or it’s starting to get cold

Think about it, they don’t have a lot of meat on their bones, and if they get too hot or too cold, they might seek shelter and food.

Dead rodents could be a reason why your vacation rental or house smells bad.

The guy that came to my house checked interior cracks and crevices too.

Check for Holes Under Sinks and Cabinets 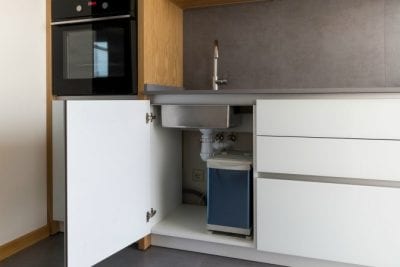 In my house, we opened the kitchen cupboard underneath my kitchen sink. There was a cut-out area so that the pipe to the sink could come through.

The hardware cloth is thick enough that they can’t chew through that.

Plug the Holes Around the Pipes Under the Sinks 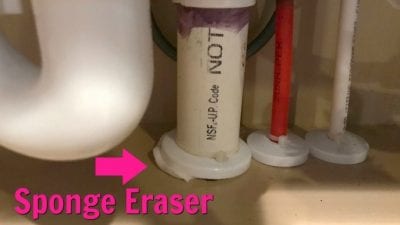 There was another sink that had a small area gap. We didn’t do the hardware cloth on that, but I took a magic eraser and I squeezed it down in the hole. So, the mouse would have to eat through the magic eraser if he wanted to come into the house. Anyway, I’ve never seen another mouse since, so it must be working.

All right, so I hate that you have the mystery smell because that’s hard to explain to a customer. An unpredictable smell in an Airbnb or a vacation rental is one of those things no customer wants to deal with.